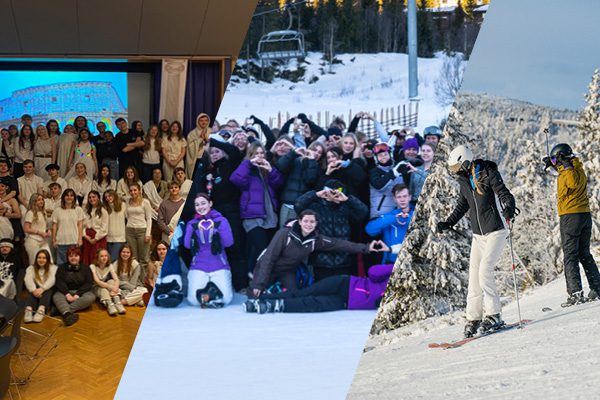 21 Jan Skiing in the mountains, Rome came to Ranum & hit by corona wave

Posted at 14:51h in Ranum News by Ranum Efterskole College

We have both good and... well, not so good stories this week. It's going to be a bit of an emotional rollercoaster, and that fits very well with the feeling we've had over the week. The Corona virus has hit several teachers and students, and it was probably really a matter of time before it would. On the other hand, we can be glad that it took so long for it to get hold of us in earnest.

So which news do you want first? The good or the bad?

The good one? Then we'll take it for now, and if you don't feel like reading more about Corona, feel free to stop reading after the review of the ski trip and Rome, which came to Ranum.

At the top in Norway: Ski trip to Kvitfjell

As Egon Olsen said - "We have a plan." And to execute that plan, we needed 7 buses, almost 400 students and teachers, 3 tons of food and a whole lot of good cheer. So we packed it in, and off we went to the mountains of Norway. Here's an overview of the biggest trip we've ever had.

After a trip by ferry - and under the stunning Älvsborgsbron bridge in Gothenburg, we landed in Sweden - at least all those who were going that way. Other buses went directly to Norway. Then the course was set for Norway and Kvitfjell.

We arrived relatively early on Monday and after a "quick" check-in and delivery of skis, poles, helmets and snowboards, we could finally hit the slopes. The fog was thick the first few days, but on the other hand the snow was good because of the cold.

Students had ranked themselves from beginner to expert beforehand, which meant everyone had the opportunity to learn something new - whether it was their first time or they were seasoned on the slopes. A bit like the level split at home, we find it makes sense to be taught with others who are at the same level.

Even though we were a relatively large group at the resort, we were well received and you didn't have to drive very far on the slopes to meet a Ranum student. There were surprisingly few challenges, which is quite an achievement when you are travelling with almost 400 people. It is clearly the biggest trip we have ever had, and so a huge thank you goes out to everyone who took part and made the trip unforgettable for all who attended.

All roads lead to Rome

While the ski students made the Norwegian slopes dangerous, the remaining students warmed up for Rome in week 8 with an Italian theme week. During the week, they tried their hand at various Italian activities, including gladiator games, pasta from scratch and cheese tasting. Alongside the festivities, students had their end-of-year exams, which, according to ancient Italian legend, went off without a hitch.
The whole week culminated on Thursday with a toga party celebrating Italian.

Here's an important announcement straight from the coral lab.

The sea has a big place in both everyday life and consciousness for us here at Ranum. That's why we want to focus on this petition, so that the sea can continue to bring joy to future generations.

So now is the time to stop if you've had enough of the good news. Here is an overview of the infection situation at our school.

We've been hit by corona this week, which has meant that a large group of students have gone home to isolate themselves. On Tuesday we had 6 infected, on Wednesday there were 4 more and on Thursday the number rose to 16 infected. During Friday we tested the remaining students and as a result we found 24 infected. The final figure is probably higher, as all close contacts sent home may also be infected. At present - this Friday afternoon - there are about 300 pupils at home as infected and close contacts.

Classes will continue next week as usual, and we will also try again to provide online classes for those students who are in isolation. We will refer to the teachers concerned if any challenges arise with the teaching.

If you are a relative of an infected student and have questions for the school, you can contact us at info@ranumefterskole.dk or on 96 66 44 00.

That's the situation. We've managed to keep the infection out of the school so far, and we're obviously very pleased with that. But now we have reached this point and we are preparing for the wave of infection to continue into next week.