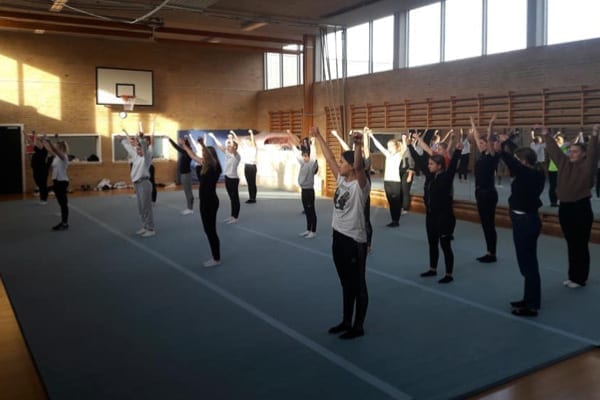 Posted at 12:19h in Ranum News by Ranum Efterskole College

We have moved into the last profile period and the various teams have got off to a good start. It won't be long before we leave again, so the profiles are busy honing their skills in their chosen subject.

In addition, the students have written their names on the poster, which will soon become a commemorative sweater. The memento will stay with them for the rest of their lives (we hope), so it's also a milestone in their after-school lives.

During the week, Global Perspectives students worked on a variety of exciting projects. Walking around the hallways, you see posters, videos and pictures of their projects. A lot of important things are being highlighted and we have included one of them here in the newsletter, which you can see below.

All that and more - just below. Enjoy!

... has started and the students have met new faces and friends with whom they form a community in the last term. This is the third and final time this school year that students are forming the school into communities of interest. It gives new energy, courage and desire to explore, test limits and discover new sides of themselves.

Remember that you can follow the profile on their Facebook pages - just search for the profile name + Ranum Efterskole College.

The new, fresh team of cheerleaders practices the routine for the first time. In a month, they'll travel to L.A., so they'll have plenty of time to get good at it, even if it doesn't feel right the first time.

Theory, theory, theory - and then a lot of test dives in the swimming pool in Rønbjerg. The divers have been given their theory books to memorise before they can come to Egypt and dive.

... is taking shape as more and more people sign their names to it. And now it's actually getting ready to go into production. Look forward to seeing it with a diverse message of community.

... has been in full swing. Students have been working on many different themes, many of them addressing important issues. Sustainability, economic inequality and poverty, hunger and hygiene in the countries of the world. The last mentioned was worked on by three girls and they chose to make a video, which you can see below.

Aquarium experts and teachers visited Vejle this weekend. Here they had set up beautiful aquariums with corals and fish, which they proudly told visitors at the fair about. Rolf and the rest of the group said that the fair went very well and that many people were interested. At the same time, the visiting students were very good at explaining the projects and generally gave the participants a good experience of what coral work means and why we do it.

A lot of students stay for the weekend to participate in Casino Weekends. Tomorrow, Saturday, there is a big joint tournament that students have signed up for during the week. It will be the biggest tournament we have ever had at the school. Be sure to follow us on Facebook and Instagram, where we'll be sharing photos from the weekend.

... quickly became one of the most popular evening activities of the year. All the stoves in Gastronomy were firing under the expert pancake guidance of Carsten.

... and it probably came as a bit of a surprise to most people. Many didn't even notice that it was draped over the school like a fine blanket. It felt like real winter - perhaps a little too late, some might say. We took the camera out to capture the fleeting moment. Beautiful it was, and two hours later the sun was shining from a clear sky.

... on artificial turf and in convincing fashion. Mathias, the coach of the team, wrote:

"On Wednesday evening these young boys braved the chilly February temperatures and threw themselves into a men's fight against Ranum's series 4 team. Now match reports like these often drown in unravelling of chances, goals and blunders. Don't be bored. Instead, this space will be used to celebrate the initiative of the young boys, who had found their own opponents, booked the pitch and tried to bribe the referee. The match ended in a foul..."

In the coming week there is a photo, video and article competition on Tuesday morning, a carnival party on Wednesday and a student party on Friday.